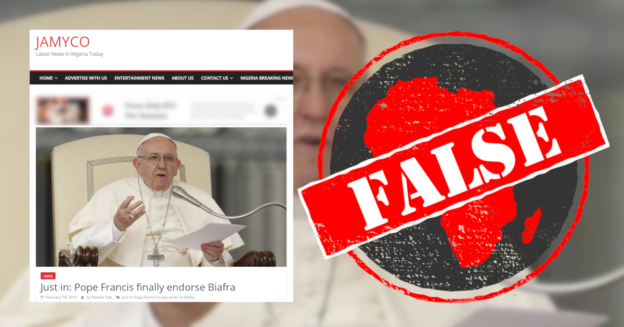 A report on website Jamyco claims Pope Francis, the global leader of the Roman Catholic church, has endorsed the secession of south-east Nigeria as the independent country of Biafra.

Under the headline, “Just in: Pope Francis finally endorse Biafra”, the report claims the pope said the region’s secession would end conflict in the country. It’s been shared on Facebook and published on another website.

“The Christian leader worldwide, Pope Francis said that the killings in Nigeria is out of hand, many Christians have lost their lives in the name of religion and politics,” the article reads.

“I suggest that the only way out of all these killings is to let Easterners go and become a so that they can freely practice their Christianity. According to newspaper today, Pope said region is a Christian Nation.”

A reverse image search on Yandex shows that the photo of Pope Francis used in the article has featured in many reports about the pontiff.

An article published on 3 December 2018 says the photo was taken two days earlier at a conference at the Vatican, the headquarters of the Catholic church in Rome, Italy. We didn’t find any earlier use of the photo on the internet.

According to reports by the Vanguard newspaper, thousands of Biafran activists from Europe, Asia and the Americas visited Pope Francis at the Vatican in March 2016.

The pope reportedly addressed and prayed for them during his weekly Angelus address from the balcony of the Apostolic Palace in St Peter’s Square.

This is the only known mention of Biafra by Pope Francis. There is no evidence on the Vatican’s official website that the pope has made recent comments on Biafra or endorsed its secession. – Allwell

FactCheck: “I want Biafra to be the home of Africa-Jews”- Isreali Prime Minister.

Fact Check: No evidence US and Russia pledged to support Biafran secession from Nigeria

FactCheck: “I want Biafra to be the home of Africa-Jews”- Isreali Prime Minister.

When you see this headline published on the 2nd September 2019, and shared over 17.4K times, out of curiosity, you are tempted to click the link to read the entire content. Nigerians being very familiar with Premium times.com, the first impression you get is that the popular and highly respected Premium Times based in Lagos -Nigeria is behind this screaming headline. Not so fast. Premiumtimenews.com is one of the publishing arms of IPOB /Radio Biafra London headed by ONE Nnamdi Kanu. Unfortunately, IPOB-Radio Biafra has a parody of every popular Nigerian digital media. Their followers barely notice the difference; hence, they share every news item that they deem promotes Biafra’s secession from Nigeria.

As for news lovers who have nothing to do with Biafra, headlines such as this will ultimately draw your attention. It is enormous, to say the least, that Benjamin Netanyahu, the Israeli Prime Minister, wants ‘ Biafra to be the home of every Jew’. The author obviously copied and paste the entire post from a popular Jewish site. At no time did Benjamin said what the caption implies. As a matter of fact, the Minister said during the Jewish Federation of North America general assembly that he wants ” Israel to be the home of every Jew. I don’t care if they’re Orthodox, Reform, Conservative, or completely secular.”

The publication :
“Israeli Prime Minister Binyamin Netanyahu and US Ambassador to Israel David Friedman addressed the closing session of the Jewish Federations of North America (JFNA) General Assembly Wednesday in Tel
Under the headline ‘We Need to Talk’, this year’s JFNA General Assembly highlighted tensions between the State of Israel and American Jewish leaders.

Speaking Wednesday afternoon, Prime Minister Netanyahu discussed US-Israel ties, describing with satisfaction the strengthening of the relationship between the two countries he has observed since first entering politics in the 1980s.

There’s no question it’s gotten a lot stronger,” said Netanyahu,
citing polling over the years, showing an increase in overall support
for the Jewish state among the American public.

When you look at the numbers, it’s quite startling,” regarding Americans’ perceptions of the Jewish state.

The Israeli premier touted President Donald Trump’s decision to
relocate the US embassy to Jerusalem, calling the move a high-point in
US-Israel relations.
He did something unbelievable. This is something that we’ve dreamed about since the founding of Israel, and he did it.

I would say that the state of the American-Israeli relationship – the alliance, has never been stronger

But, Netanyahu added, Israel must work to expand outreach among
demographic groups where support for the Jewish state is weakest,
listing off “African Americans, Hispanics, young people

Things are never as good as you think – but they’re also never as bad as
you fear,” the Prime Minister continued, playing down perceptions of a
left-wing backlash against Israel and Zionism in the US

Turning to relations between Israel and the American Jewish
community, Netanyahu said he was working to promote the vision of Israel
as a ‘home for all Jews.
I want Israel to be the home of every Jew. I don’t care if they’re Orthodox, Reform, Conservative, or completely secular.
Netanyahu responded to claims from some in the American Jewish community
that his government’s stance on “core issues” of religion and state
were challenges to Israeli democracy.

The Prime Minister explained that his government’s policies on issues
like conversion to Judaism, recognition of the Reform Movement, the
Sabbath in the public sphere, and non-Orthodox prayer at the Western
Wall were part of a long-standing tradition in Israel politics of
dealing with religion-and-state issues piecemeal.

These policies are part of “slowly evolving arrangements,” said
Netanyahu, adding that the primary driver for change was “the evolution
of the Israeli electorate,” alluding to demographic changes and the
growth of the haredi population in Israel”.

As you can see, there was never a time during the Prime Minster’s speech he mentioned Biafra. The entire publication is not only misleading and ridiculously inaccurate; it is fake and false news! The publishers achieved their desired and targeted goals. The members who read and share this false news, have no way of verifying it. Sad.

Fact Check: No evidence US and Russia pledged to support Biafran secession from Nigeria

08:17 | 14th March 2019 (GMT)A report by online news outlet Jamyco claims the governments of the United States and Russia have pledged to support the separation of south-eastern Nigeria to form the independent state of Biafra.

The report has been shared dozens of times by a number of Facebook pages, most of them supporters of Biafra. It includes a photo of US President Donald Trump with his Russian counterpart Vladimir Putin.

It says “US political expert, Michael Kerry” believes Biafra lost the 1967-1970 civil war because its then leader Chukwuemeka Ojukwu did not agree to a deal with Russia.

It adds that the door is “still open” and the US and Russia are “ready” to help Biafra secede in exchange for its oil “for five years”, according to a “Biafran newspaper”.

A Google search couldn’t find a US political expert named Michael Kerry. The link on “Michael Kerry” in the report leads to another Jamyco article that claims the Chinese government is also backing Biafra.

The link on “Biafran newspaper” leads to yet another Jamyco story, this one saying Putin had endorsed Biafra.

A reverse image search shows the photo in the report was taken in July 2017, when Trump and Putin met at a G20 Summit in Hamburg, Germany.

A search for “Biafra” in US Department of State press releases returns no results. And if the claim of US and Russian support for Biafra were true, it would be a serious diplomatic issue widely reported by mainstream international media. – Allwell Okpi (14/03/19) 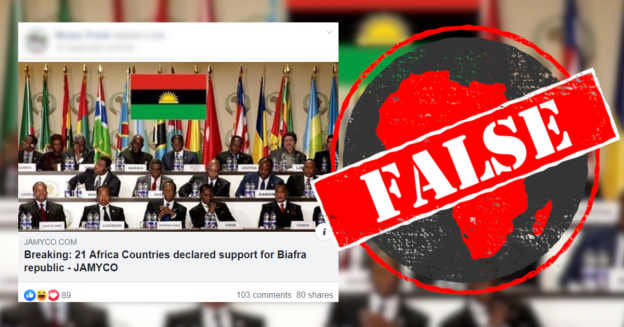 An article on the blog Jamyco claims 21 African countries have declared support for the independence of Biafra, a disputed territory in southeast Nigeria.

Several Facebook pages and groups have shared the story. They include APC Worldwide Platform, a page of supporters of Nigeria’s ruling political party, from which it has been shared 80 times.

Africa Check has previously debunked a number of Biafra-related reports published by .

The article includes a photo of 19 African presidents with flags and African Union logos behind them. The historical flag of Biafra has been added to the top of the image. The flag doesn’t appear in the original photo.

The presidents shown include Jacob Zuma of South Africa and Thomas Boni Yayi of Benin. Both have left office: Zuma in 2018 and Boni Yayi in 2016.

A Google reverse image search shows the photo has been published online a number of times, including as far back as in 2012.

There are no credible news reports from September 2019 saying 21 African countries declared support for a republic of Biafra. – Allwell 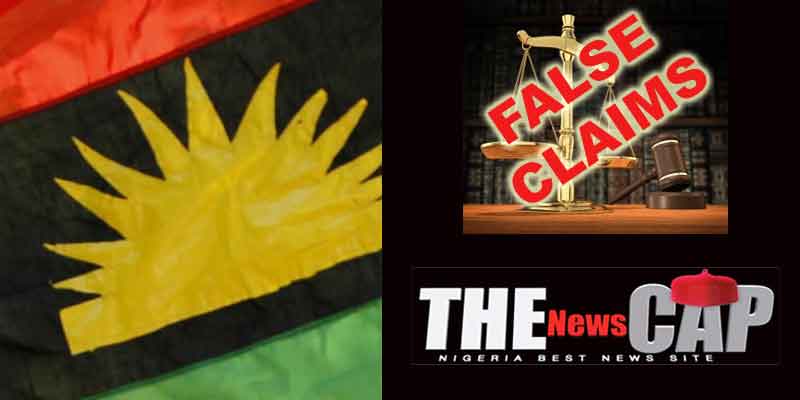 A report by the Biafra Star claims German President Frank-Walter Steinmeier has praised Nnamdi Kanu, leader of the Indigenous People of Biafra, for his “courage on Biafra struggle”.

The report, published on Thursday 11 July 2019, claims Steinmeier “visited Israel on Wednesday” where he expressed the support “while speaking with Israeli prime minister Benjamin Netanyahu on the crises in south Cameroon, Nigeria and Biafra”.

“He [Steinmeier] comment on Nnamdi Kanu, for his courage to move on with Biafra agitation in the midst of challenges, it is a matter of time, Biafra will become a Nation,” the report reads.

An internet search found no record of Steinmeier visiting Israel in the past year.

The German president’s most recent official visit to Israel was in May 2017.

The photo used in the report was taken on 4 April 2017 when Steinmeier spoke to the European parliament in Strasbourg, France. Africa Check could also not find any trace of a credible link between Steinmeier and Biafra.

In the past months we have researched a number of claims that world leaders support the call for the secession of south-east Nigeria as the nation of Biafra, and found them to be false. – Allwell Okpi